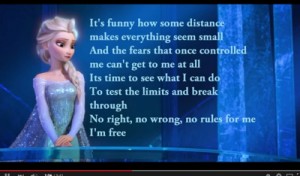 In 2014 the animated masterpiece, “Frozen”, was released by the Walt Disney Studios and became a worldwide phenomenon.

It’s main song “Let It Go” by Idina Menzel became the movie’s all-empowering ballad for girls –– and women –– all around the world. The song also won a Grammy Award and the Academy Award for Best Original Song.

I often tell my clients to “Let It Go” because it’s simply the best way for them to put a problem behind them.

I say “Let It Go” to a bad relationship… to a bad memory or a nightmare… to a job that didn’t work out the way you wanted it to… to addictions like smoking or obsessive eating… to bad habits… to overcoming fears… or to just about anything negative in your life.

It’s amazing how these three simple words can do so much for so many people!

Here are some of the song’s lyrics that may be helpful to you:
”Let it go, let it go, can’t hold it back anymore…
And the fears that once controlled me can’t get to me at all.
It’s time to see what I can do, to test the limits and break through.”

…and just how can you actually “Let it Go”?

I help clients to let go by changing old negative pathways in the brain to new positive pathways using one of the energy therapies called The Emotional Freedom Technique or EFT, which is a method of tapping consciously on various energy meridians that Chinese and Tibetan practitioners have used for centuries.

And I also share the Stoppage Method, which is a cognitive behavior technique which has the same positive salutary effect. Then I combine those releasing techniques with a guided visualization that helps them imagine what it is that they want to have in their lives after they are free from the old negativity. It all works wonderfully and successfully to create positive change quite quickly!