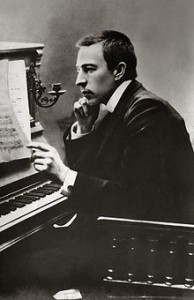 Sergei Rachmaninoff is known as one of the world’s greatest composers, musicians and conductors.

However, his first symphony in 1897 was such an utter failure that the critics savaged it. One compared it to “the 10 plagues of Egypt” and further suggested its composer must have studied at a “conservatory in Hell.”

Already a sensitive, moody personality and extremely self-critical, this sent Rachmaninoff into a three-year depression and a severe case of writer’s block. During that time, he couldn’t even write a note of music even though he performed and conducted.

Then , in early 1900, his relatives sent him to see Dr. Nicolai Dahl, a physician with training in neurology, as well as an amateur musician and a very cultured gentleman. Best of all, Dr. Dahl has studied Hypnosis in Paris under the esteemed Dr. Jean-Martin Charcot- Freud’s teacher, as well.

Dr. Dahl met with the composer daily for three to four months, providing him with “pep talks” and positive reinforcement. The good doctor repeatedly told Rachmaninoff, “You will begin to write your concerto. You will work with the greatest of ease. The concerto will be of excellent quality.”

This form of positive repetition was successful, resulting in Rachmaninoff’s Piano Concerto No. 2, which became one of the most popular classical pieces ever written. In fact, Sergei dedicated the piece to Dr. Dahl on the sheet music.

Had Rachmaninoff been my patient in the 21st century, I would have helped him “Let It Go” with the Emotional Freedom Technique to dissipate his doubts, fears, humiliation, anger, resentment and self-criticism.

Next, I would also have taught him the Stoppage Method to prevent negative thoughts from taking over his mind.

Finally, I would have used Guided Imagery as Dr. Dahl had done, to keep Sergei’s creativity flowing with ease, imaging himself creating a concerto that would be acclaimed in his lifetime worldwide and long after his death.