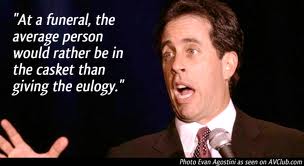 Surveys and research results show that most people would rather die than talk in front of a live audience. That’s why Jerry Seinfeld says: “This means to the average person, if you go to a funeral, you’re better off in the casket than doing the eulogy!”

So, what’s the big deal about speaking in front of people?? I haven’t figured that out for sure, but for over 25 years, I have been helping clients successfully get over it! I must say that almost 100% of the clients I have worked with in hypnotherapy and EFT are now comfortable speaking in front of others and some of them are so comfortable that they seem like professional speakers. People who have experienced this pervasive fear often suffer what is considered a Panic Attack… the rapid heart rate, shallow breathing, sweaty palms, light headedness… all symptoms of the  ‘flight or fight or freeze’ syndrome… essentially the fear for one’s life. 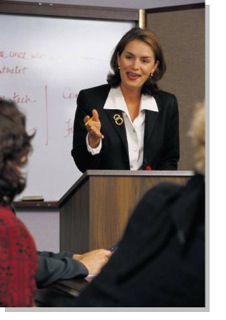 Often they need to calm the body and calm the mind and get ‘real’ about their fears and realize that they, truthfully, will not die if they step up and speak in front either a small or large group. Often they need to learn calming skills… to slow down breathing… to let go of the old habit… and to possibly picture the audience as a friendly group of faces… and that they, the speaker, are often the one who knows the most about the subject at hand.

When working with me, they will generally experience what is called a ‘Trance Rehearsal’ by practicing in their mind being a successful presenter and feeling comfortable and  truly successful…and practice this over and over until the conscious and unconscious minds are in sync. Basketball players do it successfully and so can speakers!