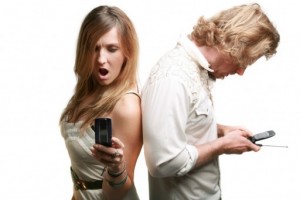 The current explosions of laptops, iPads, iPhones, etc. have brought many, many positive benefits… but we are finding that everything has its Shadow/Negative repercussions.

Most of us are thrilled and delighted that we are so tuned in and connected to our ever-present electronic devices… especially our smartphones… right?

Well, not quite so “right”… I am seeing clients who have issues serious enough to seek the help of a hypnotherapist… many feel trapped by their devices and cannot seem to separate from them… to the detriment of their reputations and relationships!

One such client had to realize that she had to separate from her fiancée because he kept his laptop in bed with them and tapped away on it night and day… he also left his smartphone on 24/7 and took calls from all over the world’s time zones. She realized that he was in a co-dependent relationship with his devices and refused to change his ways to the detriment of their relationship!

One client is addicted to texting mean and nasty messages to women who are not really “into him”…and is seriously about to damage his previously positive position in his profession as a result… as the women he’s texting have blocked his number and are telling their friends and colleagues of his weird texts to them… and still, he’s having difficulty stopping this negative, self-destructive habit.

Another couple is trying to get over what they call “text-fighting”… firing off hurtful messages to each other… causing a great chasm in their relationship.

And what is the deal about having boundaries between our work life and our private life when we can be connecting with each other at any time at all… here it is after 8pm and I am here at my laptop writing this blog… I think I need to do the Stoppage Method,  turn it off and go read a book.