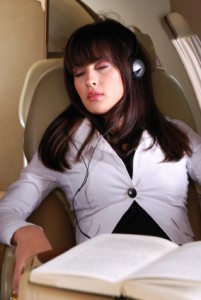 For example, one client reported that she was listening to her recorded session as MP3 audio file when she was traveling by airplane… and she was so relaxed and her stress so reduced that she realized that she had absolutely no fear of flying!  And this is not terribly unusual  BUT she had come in for weight loss sessions and had not even mentioned to me that she had a fear of flying.

Another client did come into my office because she had a fear of flying… and on her trip to Argentina, she felt safe,  was comfortable and serene… but her husband was so pleased to notice that she was drinking far less wine and was incredibly pleasant to him… both were an added bonus to their relationship as a result.

So, what’s going on here?  Well, what I feel is happening is that, as clients ‘let go’ of certain things they are holding onto tightly, other tightly held thoughts and behaviors are subsequently released at the same time. Sometimes, we aren’t even aware consciously of the things that are bothering us… but we start to let them go… and all the other negatives associated with them follow along and leave, as well.

Therefore, letting go with the Emotional Freedom Technique (EFT) and positive programming with Guided Visualization can bring you even more benefits that you had even hoped or intended.